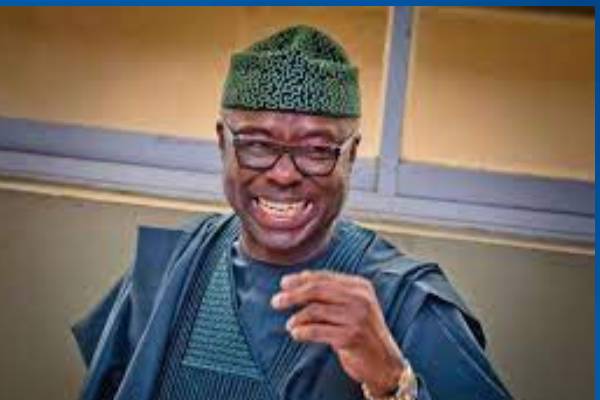 Minister of Industry, Trade and investment, Niyi Adebayo, has commended INEC for introducing technology into Nigeria’s electoral process saying it could have helped him earn a second term in 2003.

Speaking to our correspondent after voting for his preferred candidate in Iyin-Ekiti, the former governor says he is impressed with the turnout of voters, but hopes INEC will take a cue from this and improve the BVAS technology.

He lost out just like Other governors elected on the platform of the Alliance For Democracy to the Political intrigues that played out when the governors decided to support the Presidential return bid of President Olusegun Obasanjo in 2003.

He was defeated by Mr Ayodele Fayose of the Peoples Democratic Party and he did not get to stand election for a Second term in 2007 unlike his predecessor.

Both Otunba Niyi Adebayo and Ayodele Fayose have been prominent since then in the Politics of Ekiti State as Godfathers to governors or even Governors themselves.

The 2007 election was contested by Kayode Fayemi of the Action Congress and Segun of the Peoples Democratic Party with Kayode Fayemi enjoying the support of Otunba Niyi Adebayo and Ayodele Fayose while Segun Oni was backed by Chief Afe Babalola and Olusegun Obasanjo.

The election eventually went the way of Kayode Fayemi after Segun was initially sworn in as Governor followed by a re-run election and an Election Petition that lasted over 3 years.

Fayemi was denied a return for a second term as Governor of Ekiti when he lost to Ayodele Fayose in 2014 in controversial Circumstances and returned in 2018 as Governor after defeating Fayose’s anointed Candidate, Olusola Eleka,.

The current Election is between the anointed candidates of Kayode Fayemi, Biodun Abayomi Oyebanji, of the APC, Bisi Kolawole of the Peoples Democratic Party, anointed by Fayose and Segun Oni, a former governor who was removed by the Courts to pave way for Kayode Fayemi’s initial emergence as governor of Ekiti State.