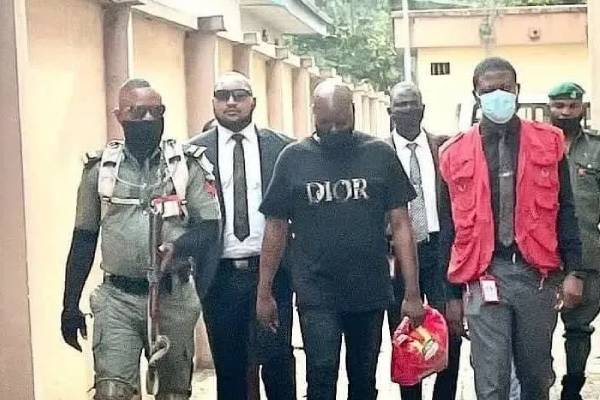 Mompha is being prosecuted by the Economic and Financial Crimes Commission, EFCC on an 8-count charge bordering on the offences of conspiracy and money laundering to the tune of over N6billion, along with his company, Ismalob Global Investment Limited.

Mompha was arrested on January 10, 2022. Upon his arraignment, he pleaded not guilty to he charges and was granted bail.

But, he has failed to appear in court on two scheduled dates for his trial.

At the last adjourned date, June 16, the case could not proceed due to his absence.

The lead defence counsel, Gboyega Oyewole, SAN had at that sitting pleaded for a stand down, but despite that, the defendant still failed to show up in court, prompting an adjournment to June 22.

At Wednesday’s proceeding, the matter was stood down to 12 noon at the instance of the prosecution.

But, when the case was called, the defendant was again absent in court, prompting Justice Dada to ask: “So, where is the defendant?”

Mr Oyewole, who also expressed surprise at the development, told the court that he was given the assurance that the defendant will be in court.

“I had his assurance up till yesterday night that he will be in court, and that was why I was waiting downstairs for him,” he said.

Mr Oyewole added that following the absence of the defendant at the last sitting, he made efforts to ensure that Mompha was in court for the continuation of the trial.

Reacting to the development, the prosecuting counsel, Rotimi Oyedepo, said: “If I say that this development is not shocking, it will be an understatement.

“As at yesterday the learned senior advocate discussed with me and assured that we should continue today with this proceeding.”

Mr Oyedepo also informed the court that “we’ve been able to file a plea bargain that he signed”.

He, however, noted that though the defence counsel seemed to have taken some steps, “it appears it is not yielding any results”.

Thereafter, Justice Dada ruled that: “The bail of the defendant is once again revoked and a bench warrant issued for his arrest against the next adjourned date of Thursday, 30th June 2022.”

It will be recalled that the trial judge had on June 10, 2022 ordered the temporary revocation of the defendant’s bail granted to him on March 28, 2022, and released him to his counsel who pleaded for one week to investigate the allegation by the prosecution that the defendant procured another international passport different from the one submitted to the court as part of conditions for his bail, with which he used to travel from Ghana to Dubai on the 11th of April 2022, thereby violating his bail terms.