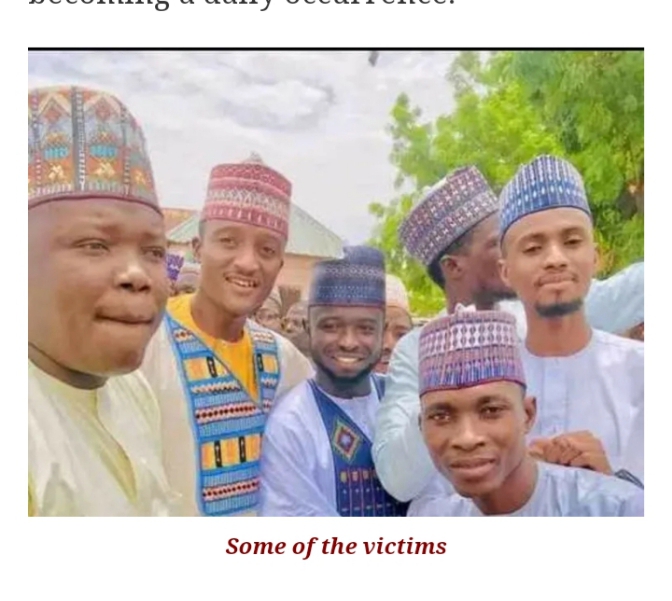 Twenty Nine abducted Zamfara wedding guests have regained their freedom after twelve days in Captivity.They were released by their captors after payment of twenty million naira cash as ransom

The bandits had earlier promised not to release them individually.

Khalifa added that the money was raised by the Union with assistance from some individuals especially the Zamfara PDP Governorship Candidate, Dauda Lawal Dare and the Member representing Gusau/ Tsafe federal Constituency Kabiru Amadu Known as Mai-Palace

The Zamfara union of Communications thanked all those who stood by them during their moment of grief.

Over fifty members of the Union of Communications in BEBEJI plaza in Gusau were abducted by gunmen in Dogon Awo village, a Community bordering Sokoto and Zamfara State on Saturday 12th June, 2022

Though a good number of the victims escaped, leaving twenty nine only in the hands of the bandits.

The abductors had earlier demanded one hundred and forty five million naira ransom, then later reduced it to Sixty million naira

They were finally rescued after the payment of twenty million naira

Zamfara State has been in the news recently for the wrong reasons ranging from attack on Communities, Kidnapping, Cattle rustling among other crimes.

The good news of the release of these victims is coming less than twelve hours that police in collaboration with some locals rescued fourteen kidnap Victims in Kuncin Kalgo Forest in Tsafe Local Government area of the state.