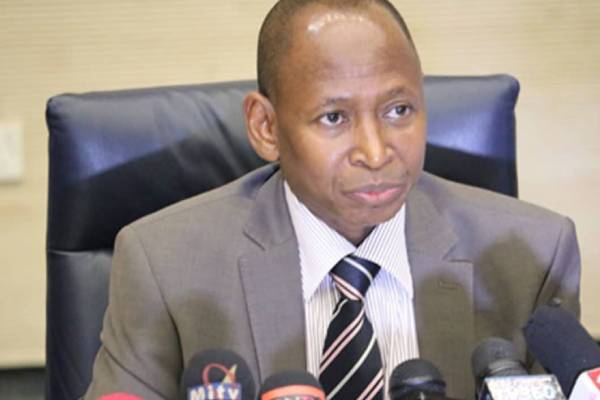 The Accountant General of the Federation, Ahmed Idris, has been arrested over alleged money laundering and diversion of public funds, by the Economic and Financial Crimes Commission, EFCC.

Mr Idris was reportedly intercepted in Kano by operatives of the Economic and Financial Crimes Commission (EFCC) on Monday evening and has been flown to Abuja, the nation’s capital, for interrogation.https://www.tvcnews.tv/purplegold/post-new.php#

The EFCC has for reportedly been investigating Mr Idris over a case of diversion of at least N80 billion in public funds which was allegedly laundered through some bogus contracts.

The companies allegedly used in laundering the funds have allegedly been linked to family members and associates of the accountant-general, according to investigators.

Mr Idris was arrested according to sources within the commission after failing to honour several invitations for interrogation.

“We kept inviting him but he kept dodging us,” one of our sources said. “We were left with no choice than to keep him under watch and arrest him.”https://www.tvcnews.tv/purplegold/post-new.php#

The spokesperson for the EFCC Mr Wilson Uwujaren however issued a Statement confirming the arrest.

The Statement reads in part “Operatives of the Economic and Financial Crimes Commission, EFCC, on Monday, May 16, 2022 arrested serving Accountant General of the Federation, Mr. Ahmed Idris in connection with diversion of funds and money laundering activities to the tune of N80billion( Eighty Billion Naira only).

“The Commission’s verified intelligence showed that the AGF raked off the funds through bogus consultancies and other illegal activities using proxies, family members and close associates.

“The funds were laundered through real estate investments in Kano and Abuja.

Mr Idris was arrested after failing to honour invitations by the EFCC to respond to issues connected to the fraudulent acts.”

The position became vacant at the time after the former Accountant General, Jonah Otunla, left office on June 12, 2015 on the Expiration of his tenure.

Mr Idris was reappointed by President Muhammadu Buhari for a second four-year term in June 2019, amid criticisms from labour groups who said the accountant-general should retire after turning 60.

Mr Idris, who is a native of Kano State, North-west Nigeria, was born on November 25, 1960, and was until his appointment as the accountant General in 2015 the Director of Finance and Accounts in the Federal Ministry of Mines and Steel Development.