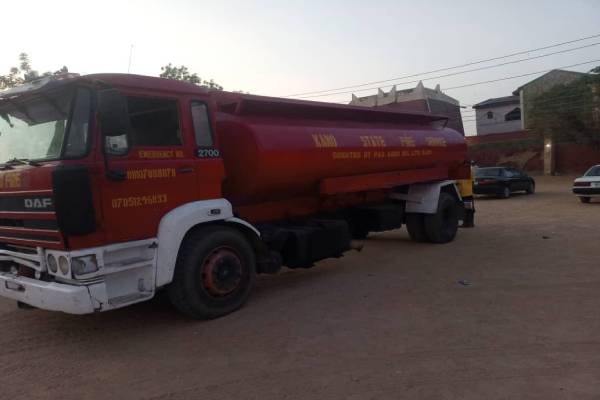 Kano Fire Service Truck on the Way to Scene of Explosion

Kano State Fire Service has confirmed the death of one person and injury of another when gas cylinder bursted in Bichi Local Area of the state.

Spokesman of the Service, Saminu Yusuf who made the confirmation in a statement disclosed that the gas cylinder fell down from a vehicle which was travelling to Katsina state.

According to the Fire Service Spokesman investigation into the incident has been launched with the collaboration the state Police command.

The statement reads in parts;

Our office at BICHI LGA received emergency call at about 07:46am from Inspector Daiyabu Tukur reported a road accident at Ijarawa Village Bichi local government area, when our men reached the area at about 08:00am found that, a commercial vehicle (J 5) with registration number FB 52 LAD headed from Kano to Katsina, conveyed cooking gas cylinders felldown on the road and one of the cylinder busted and affected two 2 people inside the vehicle, by name Mekano Muhammad of about 45 years old was rescued unconscious and later confirmed dead, and Abdullahi Usman of about 40 years old was rescued alive.

All victims handed over to police officer by name Usman Usman of Bichi police out post.

Cause of the incident is under investigation.

I will seize this opportunity to call the vehicle users to Drive with care to avoid road accident.