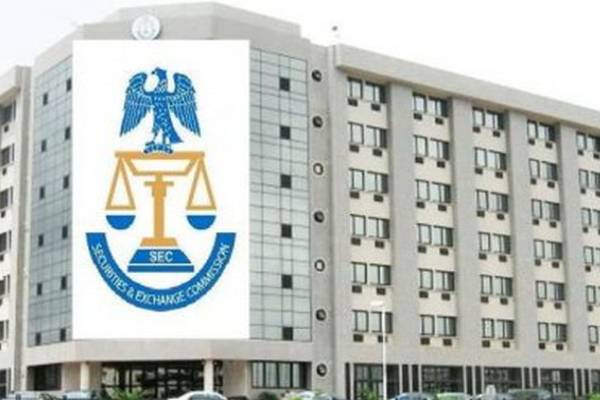 The Securities and Exchange Commission (SEC) has received support from the Chartered Institute of Brokers (CIS) to impose charges on fixed income securities in Nigeria’s capital market.

This was stated by Mr.  Olatunde Amolegbe, president of the CIS, stated in an interview with newsmen on Wednesday in Lagos.

Amolegbe stated that imposing a regulatory charge on transactions would not be a problem.

“The Securities and Exchange Commission is bringing significant regulations to all markets including the fixed income markets.

“This is to bring more sanity to those markets. Therefore, there is no issue with the introduction of a regulatory charge on transactions.

“However, whether it should be as high as 0.02% is open to discussion,” he said.

The CIS CEO explained that the regulatory charge could increase net yield on instruments, reduce spreads, and impact trade volumes.

The SEC announced that it would begin charging a regulatory fee on fixed income (bond) secondary market transactions on January 1.

The SEC stated this in a circular issued in December 2021.

According to the commission, the circular was issued in accordance with Section 13(u) of the Investments and Securities Act (ISA) of 2007 and Schedule 1, Part D of the SEC Rules (Registration Fees, Minimum Capital Requirements, Securities and others).

The circular gives the SEC authority to levy fees on transactions involving investments and securities in Nigeria, among other things.

According to the circular, capital market operators and stakeholders were notified that a regulatory fee structure on secondary market bond transactions would go into effect on January 1st.

Bond transactions executed on a securities exchange, reported by voice or any other means to an Exchange, would be considered secondary market transactions on bonds, according to the document.

The SEC will charge 0.025 percent of the total value of all secondary market bond transactions under this fee structure, the circular stated.

The circular added that securities exchange where the transaction took place would charge a fee of not more than 0.025 percent of the total value of secondary market bond transactions.