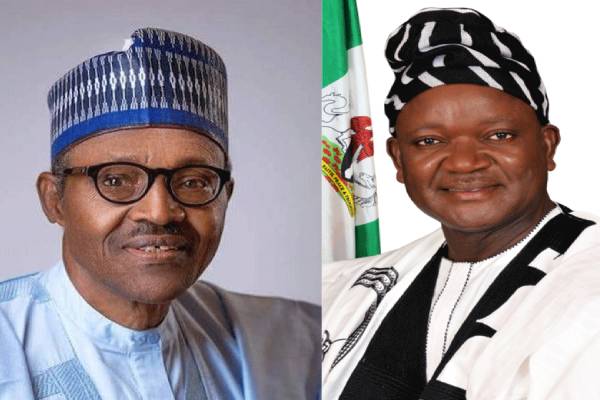 Benue State Governor, Samuel Ortom has commended President Muhammadu Buhari for withholding assent on the Direct Primaries Clause as captured in the amended Electoral Act sent to him by the National Assembly.

President Buhari in a letter to President of the Senate, Ahmed Lawan raised concerns that the amendment as proposed “is a violation of the underlying spirit of democracy which is characterised by freedom of choices. Political party membership is a voluntary exercise of the Constitutional right of freedom of association.”

The President also said, the amendment to allow for Direct Primaries “will lead to a plethora of litigations based on diverse grounds and issues of law.”

Governor Ortom who addressed journalists in Makurdi, appealed to President Buhari to also listen to views of Nigerians on the poor state of the economy and security in the country.

The Governor also commended the NASS for passing the Amended Electoral Act which also captured Electronic Transmission of results and transmitting same to the President for assent.

He then urged members of the National Assembly to also hasten the review of the clause on direct primaries to allow political parties decide on the mode of primaries in accordance with their capabilities, stressing that consensus arrangements should also be encouraged.

“I wish in the same manner, appreciate the President for withholding assent on the Direct Primaries. I appeal that he also listens to Nigerians on the economy and security of the country,” the Governor stated.

Police Arrest Suspects in Possession of Illegal Firearms in Sokoto

No cause for alarm Ikoyi Registry legal, valid – FG