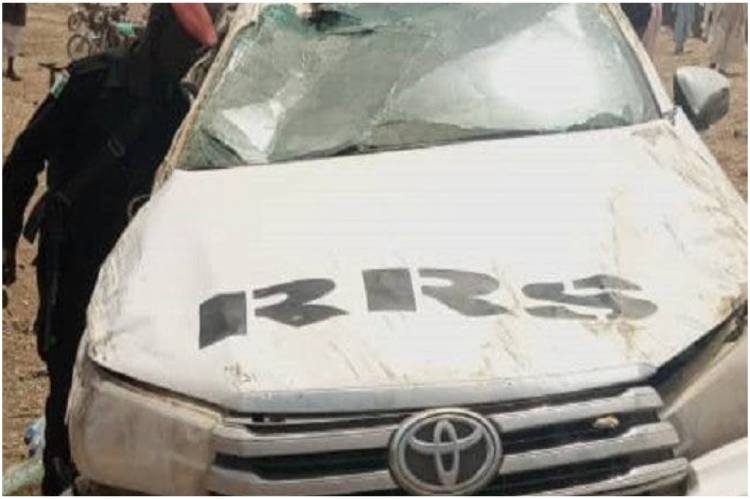 A Toyota Hilux vehicle conveying some Police personnel of the Rapid Response Squad in the convoy of the Bauchi State governor, Bala Mohammed, was involved in a crash.

The RRS 3 Vehicle of the Bauchi State Police Command conveying about 10 of the personnel somersaulted after the driver lost control because of the dust on the road which is currently under construction.

The Burga-Yelwan Duguri-Alkaleri Road is an over 60-kilometre project being constructed by the Governor Bala Mohammed administration.

The Governor has been on an inspection tour of projects awarded by his administration across the state since Saturday and was at the Tafawa Balewa Local Government Area on his way to Alkaleri LGA on Monday when the incident happened.

The accident happened when the car was in the process of overtaking another vehicle when the driver lost control due to the dust and skidded off the road and somersaulted.

Two of the four Policemen standing in the back of the vehicle were flung out of the Hilux.

Immediately it happened, the vehicle conveying journalists and other vehicles including those of the Commissioners of Works and Transport and that of Information, in the convoy stopped to rescue the victims of the crash.

Although there was no loss of lives, it was learnt that the Policemen sustained varying degrees of injuries in the crash while one of them was unconscious.

The vehicle, driven by one Sabo, was left at the scene of the incident due to the damage it suffered.

All the occupants were rushed to the nearby General Hospital, Bununu, the Tafawa Balewa Local Government headquarters, for medical treatment.

The Governor’s vehicle and other conveying top government officials had gone far and could not stop when the incident happened.