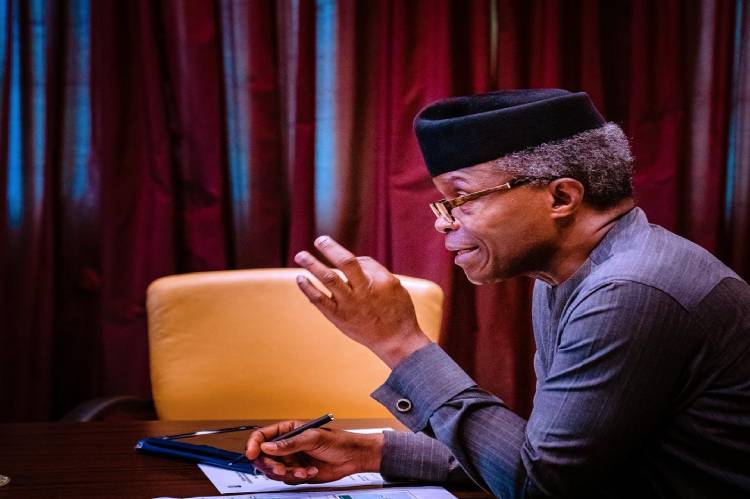 Vice President, Yemi Osinbajo, said the impact and interest generated by the ongoing implementation of the Survival Fund under the Economic Sustainability Plan of the Federal government to address the Economic impact of the Covid-19 pandemic has shown that there is a need to expand the scope and reach of the benefits to an even larger number of the populace.

The Vice President dropped this hint at a virtual meeting held just before the Christmas holidays between him and the Steering Committee of the MSMEs Survival Fund.

The meeting was attended by Minister of State for Industry, Trade and Investment, Ambassador Mariam Katagum, Chairperson of the Committee; the Chairman of First Bank, Mrs Ibukun Awosika, the Committee’s Vice Chairperson, among other members.

The scheme has so far commenced disbursement to about 500,000 beneficiaries: the Payroll Support Scheme has paid close to 350,000 beneficiaries; almost 166,000 0f 300,000 Artisans have benefitted from the Artisan & Transport Scheme; and the Corporate Affairs Commission is ramping up numbers to register 250,000 new businesses free of charge.

By the end of December, an approximate of 400,000 Payroll Support beneficiaries would have received salaries for October to December, while structures have been put in place to commence the General Grants and the Guaranteed Offtake Scheme early next year.

Speaking on the implementation of the scheme and the need to expand the scope, the Vice President said “the data indicating what you have done so far shows that it is possible for government to deliver big programmes, and to deliver them credibly.

Prof. Osinbajo noted that, “I think that we must find ways of expanding the scope of the scheme, because when you look at the numbers that we have approval for, the numbers are small in comparison to the enormity of the problems that we are faced with.

“Even if we are able to reach 2 million beneficiaries, it is still a tiny percentage of the millions who require help and assistance. So, I think, we have to find ways of trying to seek an approval to expand the scope of the scheme. This is an important aspect of it.”

Commending the committee for their efforts in impacting the lives of beneficiaries of the Payroll Support, the Artisan and Transport grants as well as beneficiaries in other tracks of the scheme, the Vice President said the partnership with the private sector in the implementation of the scheme was notable.

In another virtual meeting on Tuesday, Vice President Yemi Osinbajo, and some federal ministers interacted with the Nigeria Automotive Manufacturers Association (NAMA).

At the meeting last week, the VP said the central plank of the government’s automotive policy was to protect the interest of all Nigerians, noting that maintaining high tariffs on automobiles will not necessarily lead to growth in the industry.

According to the Vice President, “Government has the responsibility for ensuring the welfare of the people, everybody and every industry. And the Auto industry is important. I understand all the issues about how the auto industry contributes to macroeconomic growth, jobs and others.”

Prof. Osinbajo noted that the way forward was for “the auto industry to challenge itself and whatever support it requires from government to be able to say, where is the Nigerian car that will be affordable to all and affordable to most people.

“You got to find a way of developing a local industry that will benefit the people. If that is not working then it may mean that it is not just an auto policy issue. I know there are many constraints to manufacturing, but we can make things work.

Explaining further, the Vice President said “I want us to take all these into account and see that we must work jointly, it is not just about protecting an industry, it is about protecting the economy, and protecting everybody.

“There are countries of the world that have the same parameters as we have and are able to do much more for their people. I think we should think along those terms, and not simply think about how this industry will maintain this relatively high tariff and for how long will this high tariff be maintained. Is this the only way of sustaining the industry? I don’t think so. You don’t need 77% percent tariff to ensure an industry grows, I don’t think so.”