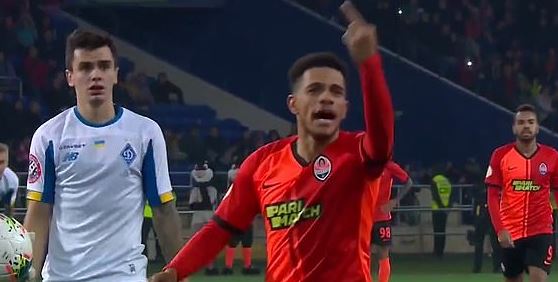 Brazilian midfielder Taison has been handed a one-match ban in Ukraine after he reacted to racist abuse from fans during a match.

Taison, who plays for Shaktar Donetsk, made a gesture at fans of Dynamo Kiev and kicked the ball into the stands after some abuse were directed at him.

The player was sent off for the incident and was in tears as he left the pitch.

World players’ union FIFPro had asked for the red card to be overturned but the Ukrainian football federation has now confirmed the suspension.

The federation also ordered Dynamo to play one match behind closed doors and imposed a fine of 20,000 thousand dollars on the club.

The Dutch Eredivisie announced that players in the top two divisions would stand still for the first minute of matches this weekend in protest against racism in Football.