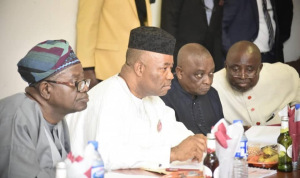 The Senate Committee on Niger Delta has rejected the 2020 budget of the Ministry of Niger Delta Affairs for exempting major ongoing projects across nine states in it’s region.

After the presentation, the Panel concluded that the N23 billion Capital Budget allocated to the Ministry was not only meagre but was designed to fail .

The Senate committee also faulted the executive arm of government for not releasing money to fund the capital projects in the 2019 budget.

Members of the committee are concerned that, despite the outstanding N21bn worth of projects that were not implemented in the 2019 budget, the executive voted only N23bn for capital projects by the ministry in the 2020 budget.

The committee resolved to reject the budgetary allocation for the ministry and directed that the budget be reworked presented by Monday.