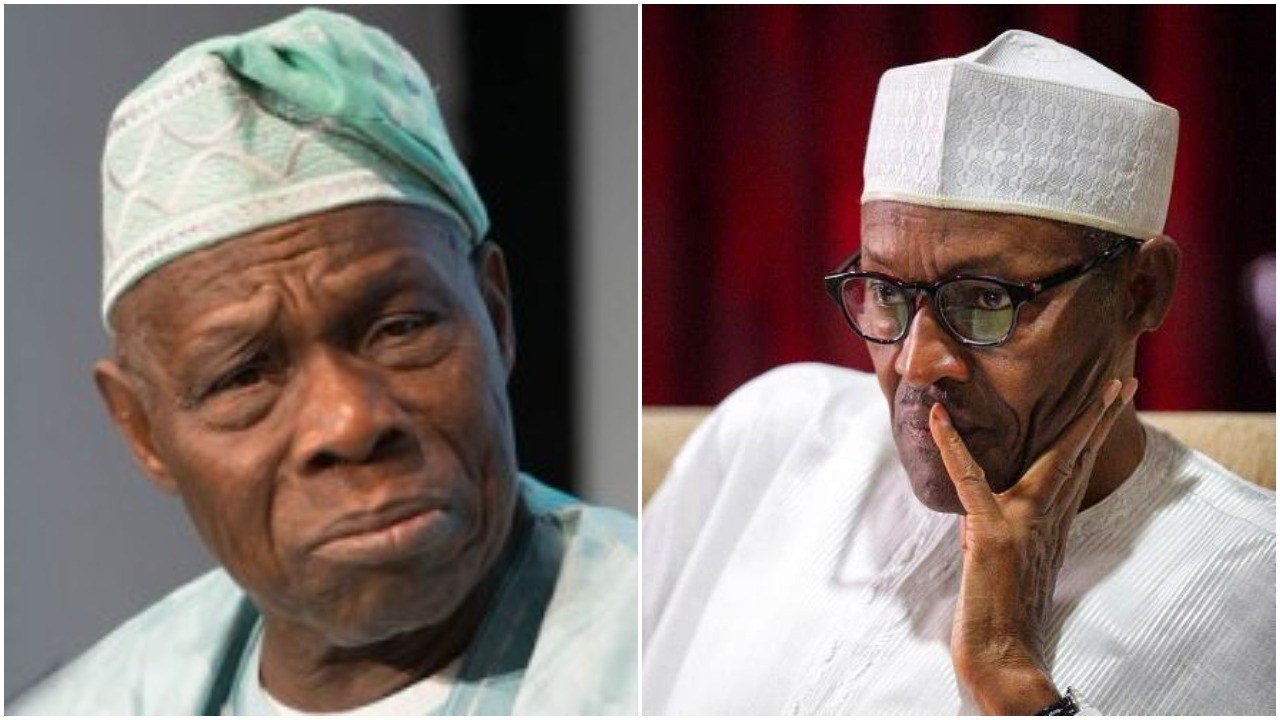 Former President Olusegun Obasanjo has written an open letter to President Muhammadu Buhari on the state of the nation, urging the President to stop treating issues of threatening national security and continuous existence of Nigeria with kid gloves.

In an open letter made available by his media aide, Kehinde Akinyemi, the former President noted that he finds it difficult to hold the pressure in him after warnings from the United States and discussions of Nigeria security situation by United Kingdom.

He expressed concerns over low level of literacy and high level of unemployment and spreading nature of Banditry, kidnapping, herdsmen and farmers clashes among others, accusing the President of poor management of diversity which, could have been the nation’s greatest and most important assets.

The Former President said he is deeply worried about four avoidable calamities which are: Buhari again, warns:

1. abandoning Nigeria into the hands of criminals who are all being suspected, rightly or wrongly, as Fulanis and terrorists of Boko Haram type

2. spontaneous or planned reprisal attacks against Fulanis which may inadvertently or advertently mushroom into pogrom or Rwanda-type genocide that we did not believe could happen and yet it happened.

3. similar attacks against any other tribe or ethnic group anywhere in the country initiated by rumours, fears, intimidation and revenge capable of leading to pogrom;

4. violent uprising beginning from one section of the country and spreading quickly to other areas and leading to dismemberment of the country.

He stated that similar situation happened in Yugoslavia and if Nigeria fails to act now, one or all of these scenarios may happen.

I am constrained to write to you this open letter. I decided to make it an open letter because the issue is very weighty and must be greatly worrisome to all concerned Nigerians and that means all right-thinking Nigerians and those resident in Nigeria.

Since the issue is of momentous concern to all well-meaning and all right-thinking Nigerians, it must be of great concern to you, and collective thinking and dialoguing is the best way of finding an appropriate and adequate solution to the problem.

The contents of this letter, therefore, should be available to all those who can help in proffering effective solutions for the problem of insecurity in the land. One of the spinoffs and accelerants is the misinformation and disinformation through the use of fake news. A number of articles, in recent days, have been attributed to me by some people who I believe may be seeking added credence and an attentive audience for their opinions and view-points. As you know very well, I will always boldly own what I say and disown what is put into my mouth.

But the issue I am addressing here is very serious; it is the issue of life and death for all of us and for our dear country, Nigeria. This issue can no longer be ignored, treated with nonchalance, swept under the carpet or treated with cuddling glove. The issue is hitting at the foundation of our existence as Nigerians and fast eroding the root of our Nigerian community.

I am very much worried and afraid that we are on the precipice and dangerously reaching a tipping point where it may no longer be possible to hold danger at bay.

When people are desperate and feel that they cannot have confidence in the ability of government to provide security for their lives and properties, they will take recourse to anything and everything that can guarantee their security individually and collectively.

For over ten years, for four of which you have been the captain of the ship, Boko Haram has menacingly ravaged the land and in spite of government’s claim of victory over Boko Haram, the potency and the activities of Boko Haram, where they are active, remain undiminished, putting lie to government’s claim. The recent explanation of the Chief of Army Staff for non-victory due to lack of commitment and lack of motivation on the part of troops bordering on sabotage speaks for itself.

Say what you will, Boko Haram is still a daily issue of insecurity for those who are victimised, killed, maimed, kidnapped, raped, sold into slavery and forced into marriage and for children forcibly recruited into carrying bombs on them to detonate among crowds of people to cause maximum destructions and damage. And Boko Haram will not go away on the basis of sticks alone, carrots must overweigh sticks. How else do you deal with issues such as only about 50% literacy in North-East with over 70% unemployment?

Herdsmen/farmers crises and menace started with government treating the issue with cuddling glove instead of hammer. It has festered and spread. Today, it has developed into banditry, kidnapping, armed robbery and killings all over the country.

The unfortunate situation is that the criminality is being perceived as a ‘Fulani’ menace unleashed by Fulani elite in the different parts of the country for a number of reasons but even more unfortunately, many Nigerians and non-Nigerians who are friends of Nigeria attach vicarious responsibility to you as a Fulani elite and the current captain of the Nigeria ship. Perception may be as potent as reality at times.

The main issue, if I may dare say, is poor management or mismanagement of diversity which, on the other hand, is one of our greatest and most important assets. As a result, very onerous cloud is gathering. And rain of destruction, violence, disaster and disunity can only be the outcome.

Nothing should be taken for granted, the clock is ticking with the cacophony of dissatisfaction and disaffection everywhere in and outside the country. The Presidency and the Congress in the US have signalled to us to put our house in order. The House of Lords in the UK had debated the Nigerian security situation. We must understand and appreciate the significance, implication and likely consequences of such concerns and deliberations.

No one can stop hate speech, violent agitation and smouldering violent agitation if he fans the embers of hatred, disaffection and violence. It will continue to snowball until it is out of control. A stich in time saves nine, goes the old wise saying.

With the death of Funke, Chief Fasoranti’s daughter, some sympathetic Nigerian groups are saying “enough is enough”. Prof. Anya, a distinguished Nigerian merit Laureate, has this to say “We can no longer say with certainty that we have a nation”. Niger-Delta leaders, South-Eastern leaders, Middle-Belt leaders and Northern Elders Forum have not remained quiet. Different ordinary Nigerians at home and abroad are calling for different measures to address or ameliorate the situation.

All the calls and cries can only continue to be ignored at the expense of Nigerian unity, if not its continued existence. To be explicit and without equivocation, Mr. President and General, I am deeply worried about four avoidable calamities:

(i) abandoning Nigeria into the hands of criminals who are all being suspected, rightly or wrongly, as Fulanis and terrorists of Boko Haram type;

(ii) spontaneous or planned reprisal attacks against Fulanis which may inadvertently or advertently mushroom into pogrom or Rwanda-type genocide that we did not believe could happen and yet it happened.

(iii) similar attacks against any other tribe or ethnic group anywhere in the country initiated by rumours, fears, intimidation and revenge capable of leading to pogrom;

(iv) violent uprising beginning from one section of the country and spreading quickly to other areas and leading to dismemberment of the country.

It happened to Yugoslavia not too long ago. If we do not act now, one or all of these scenarios may happen. We must pray and take effective actions at the same time.

The initiative is in the hands of the President of the nation, but he cannot do it alone. In my part of the world, if you are sharpening your cutlass and a mad man comes from behind to take the cutlass from you, you need other people’s assistance to have your cutlass back without being harmed.

The mad men with serious criminal intent and terrorism as core value have taken cutlass of security. The need for assistance to regain control is obviously compelling and must be embraced now.

A couple of weeks ago at a public lecture, I had said, among other things, that:

“In all these issues of mobilisation for national unity, stability, security, cooperation, development, growth and progress, there is no consensus.

“Like in the issue of security, government should open up discussion, debate and dialogue as part of consultation at different levels and the outcome of such deliberations should be collated to form inputs into a national conference to come up with the solution that will effectively deal with the issues and lead to rapid development, growth and progress which will give us a wholesome society and enhanced living standard and livelihood in an inclusive and shared society.

“It will be a national programme. We need unity of purpose and nationally accepted strategic roadmap that will not change with whims and caprices of any government. It must be owned by the citizens, people’s policy and strategy implemented by the government no matter its colour and leaning.

“Some of the groups that I will suggest to be contacted are: traditional rulers, past heads of service (no matter how competent or incompetent they have been and how much they have contributed to the mess we are in), past heads of para-military organisations, private sector, civil society, community leaders particularly in the most affected areas, present and past governors, present and past local government leaders, religious leaders, past Heads of State, past intelligence chiefs, past Heads of Civil Service and relevant current and retired diplomats, members of opposition and any groups that may be deemed relevant.”

The President must be seen to be addressing this issue with utmost seriousness and with maximum dispatch and getting all hands on deck to help. If there is failure, the principal responsibility will be that of the President and no one else.

We need cohesion and concentration of effort and maximum force – political, economic, social, psychological and military – to deal successfully with the menace of criminality and terrorism separately and together. Blame game among own forces must be avoided. It is debilitating and only helpful to our adversary.

We cannot dither anymore. It is time to confront this threat headlong and in a manner that is holistic, inclusive and purposeful. For the sake of Nigeria and Nigerians, I pray that God may grant you, as our President, the wisdom, the understanding, the political will and the courage to do what is right when it is right and without fear or favour.

May God save, secure, protect and bless Nigeria. May He open to us a window of opportunity that we can still use to prevent the worst happening. As we say in my village, “May God forbid bad thing”.

COZA: CAN assures members of its support