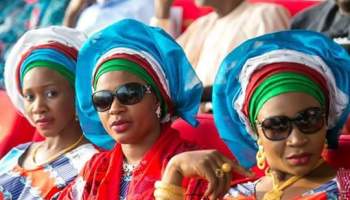 Women of the All Progressives Congress Aspirants Forum are demanding for key appointments in President Muhammadu Buhari’s new cabinet.The leader of the group, Adedoyin Eshanumi, told journalists in Abuja, that the demand has become necessary because men have taken more than 90 per cent of political positions, in the party.

The National Policy of Women that was adopted in 2000 reserves 30 percent for women under the affirmative action guidelines.

In 2011, the former administration had women occupying about 33 percent of the cabinet positions and there were calls to make it up to 35 percent as
obtainable in some African countries.

This forum is asking that the president Muhammadu Buhari administration should fulfil it’s promise of ceding 35% of cabinet position to women.

They also call on 9th National Assembly to enact laws that will protect female politicians from the “bullying” nature of their male counterparts.