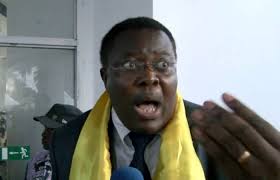 Cameroon’s contrite statement follows outrage from Israel, which had demanded an “immediate apology” for the minister’s comments.

The Israeli Embassy in Yaoundé had called it a “big disappointment for bilateral relations” between the two countries.

The Israeli Embassy said the Deputy Justice Minister’s comment had appeared to justify the Holocaust, in which some six million Jewish people were killed in Nazi Germany.

It went on to suggest the comments would have an impact on the two countries’ relationship.