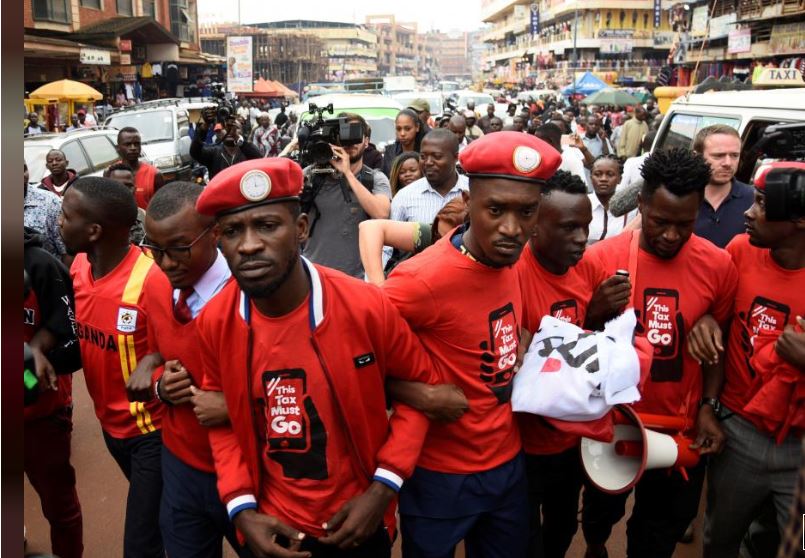 An opposition Ugandan lawmaker was charged with treason on Thursday over his alleged role in the stoning of President Yoweri Museveni’s convoy this month.

A civilian magistrate ordered Robert Kyagulanyi remanded in custody until Aug. 30 and granted him access to private doctors, citing the “health of the accused”, according to footage broadcast on private broadcaster NBS Uganda.

Kyagulanyi, who only entered parliament last year, has been left unable to stand after being beaten while in detention, his lawyer told Reuters, citing relatives who visited him. The Ugandan government says the assault accusation is “rubbish”.

In the TV footage, Kyagulanyi was seen walking with one crutch and the assistance of prison wardens when entering the courtroom.

Earlier on Thursday, a separate military court dropped charges of unlawful weapons possession against Kyagulanyi, a popular musician whose songs’ biting criticism of Museveni’s government has won him a large youth following.

His detention, along with and four other politicians critical of Museveni, sparked two days of anti-government demonstrations in the capital Kampala and other parts of the country this week.

Three other lawmakers and dozens of other people have also been charged with treason over their alleged role in the convoy stoning.

Separately, police arrested two opposition politicians on Thursday for defying orders not to leave their homes after police placed them under “preventative arrest” to try to head off further unrest.

Ugandan police spokesman Emilian Kayima said police had received “intelligence reports that these leaders were inciting people to riot yet they have other lawful avenues, like petitioning a higher court, to seek redress about their fate of their colleague”. He was referring to Kyagulanyi.

“We don’t want to experience what we went through on Monday,” he said, referring to a demonstration in Kampala at which Ugandan police fired tear gas and military units were deployed to disperse protesters.

Representatives of several prominent opposition politicians had said on social media that they had been prevented from leaving home and that they had planned to attend Kyagulanyi’s court appearance.

Protesters and opposition supporters accuse Museveni, in power since 1986, of stifling dissent through intimidation, beatings and detentions, charges which his government denies.

Last October, when parliament was debating whether to remove a constitutional age limit that would have barred Museveni from seeking re-election in 2021, security forces and protesters clashed on the streets and two protesters died.

The presidential age limit has since been removed