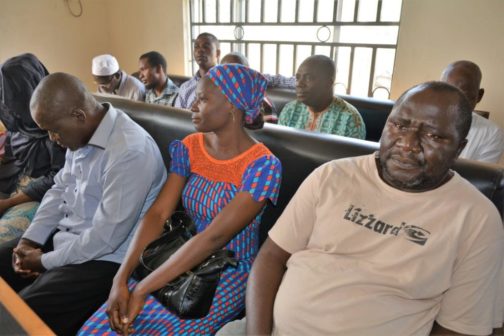 An Abuja High Court has remanded nine persons in prison for their alleged involvement in payroll fraud.

They were docked on a sixteen-count charge brought by the Economic and Financial Crimes Commission accusing them of inserting fictitious names on the federal government’s payroll.

An application for bail by the defense counsel was denied by the court due to late filing. The case was adjourned to next week.

The offence breaches Section 97(1) of the Penal Code Act (Abuja) LFN 1990, and punishable under the same Act.

One of the counts reads:

“That you, Usman Aliyu Dayo, Osuntope Opeyemi, Ojeifo Robert Sylvanus, Johnson Adedokun and Oyebade Ebenezer Ayodeji, being employees of the Federal Government of Nigeria in the Office of the Accountant General of the Federation, Nigeria Agricultural Quarantine, Federal Ministry Water Resources and Federal Ministry of Agriculture in the year 2014 in Abuja within the Judicial Division of the High Court of the Federal Capital Territory committed theft by dishonestly creating fictitious names and accounts in the Federal Payroll for payment of the sum of N97,373,401.31 (Ninety Seven Million, Three Hundred and Seventy Three Thousand, Four Hundred and One Naira, Thirty One Kobo) as salaries and allowances from the Federal Government’s account without her consent and thereby committed an offence punishable under Section 289 of the Penal Code Act ( Abuja ) LFN, 1990”.

The defendants pleaded not guilty to the counts.

In view of their plea, counsel to the EFCC, Muktar Aliyu, asked the court to fix a date for hearing of the case and to remand the accused persons in prison custody.

However, Chikwe Malachy, representing the 1st defendant informed the court of a pending application dated October 27, praying the court to admit his client to bail.

Other defence counsel also joined in seeking bail for their clients, while Rotimi Oluje, representing the 6th and 7th defendants, asked the court for a short adjournment in order to conclude the process of plea bargain with the EFCC on behalf of his clients.

Responding, Aliyu, informed the court that, “Though the defendants applied for plea bargain, parties are yet to decide on the terms”.

Justice Kekemeke, in the circumstance, ordered that the defendants be remanded in prison custody and adjourned to November 8 for hearing of the bail applications.