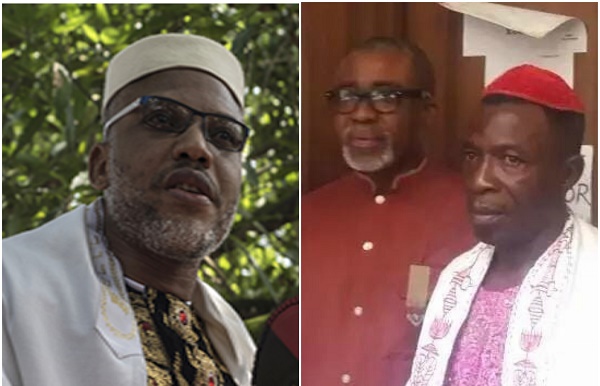 The Senator representing Abia-South Senatorial District of Abia State in the Senate, Enyinnaya Abaribe  ‎on Tuesday pleaded with the Federal High Court in Abuja to give him more time to produce the IPOB leader.

‎Abaribe, who had earlier told Justice Binta Nyako, that he had no information about Kanu’s whereabouts, was forced to request for time to produce the defendant in court.
Abaribe’s lawyer, Ogechi Ogunna, initially informed the judge that the senator had filed a motion seeking to be discharged as a surety for the defendant.

But the judge refused his application and gave him three options: He should either provide him to the Court before withdrawing from being his surety, Forfeit his bail bond or ask the court to give him time to provide him before the Court.

Abaribe,  and a Jewish Priest, El-Shalom, had on April 28, entered an undertaken to produce Kanu before the Abuja Division of the Federal High Court on October 17 to face treasonable felony charge the Federal Government preferred against him and four other pro-Biafra agitators.

Kanu was billed to appear before trial Justice Binta Nyako to be re-arraigned on an amended five count charge marked FHC/ABJ/CR/383/2015, alongside his co-defendants, Chidiebere Onwudiwe, Benjamin Madubugwu, David Nwawuisi and Bright Chimezie.