TVC N. After winning the 2016 Global Fairness Award in Washington DC, Ngozi Okonjo-Iweala, two-time finance minister of Nigeria, joined Pope Francis at the weekend in addressing the world’s top 500 CEOs on the effects of globalisation.

Receiving the award, Okonjo-Iweala said 2017 must be a year to wage a better fight for global fairness for the vulnerable.

“I appreciate the Trustees of the Global Fairness Award for recognising a lifetime devoted to development, including the privilege I have now of working for children’s immunization, through Gavi, and for managing climate risk in Africa through the African Risk Capacity,” she said.

“Let 2017 be a year of continued fight for fairness for the most vulnerable among us, and those left behind in this world.”

Immediately after the award ceremony, the Gavi boss headed for the Vatican City where she joined the head of the Catholic Church in speaking to the most influential CEOs on the planet. 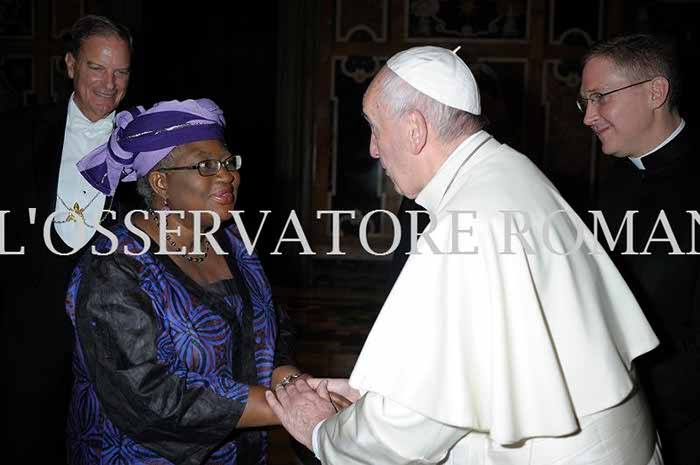 “Our world today is marked by great unrest, inequality among people continues to rise, and many communities are impacted directly by war and poverty or the migration and poverty which flows from them,” he said.

“I pray that you may involve in your efforts those whom you seek to help; give them a voice, listen to their stories, learn from their experiences and understand their needs.

“See in them a brother and sister, a son and a daughter, a mother and a father. Amid the challenges of our day, see the human face of those you earnestly seek to help.”

Okonjo-Iweala, on the other hand, spoke on the effects of globalisation on developing countries, including Nigeria.

She said Nigeria’s textile industry was crashed by globalisation, among other  things.

She said globalisation had facilitated a “loss of textile jobs in Nigeria from 600,000 to 20,000 in two decades, and loss of 75,000 jobs in South Africa over a decade in textiles, footwear, and machinery”.

Okonjo-Iweala said China was making the same kind of textile made by United Textile in Nigeria, and selling it for much less, making it impossible for local manufacturers to compete.

She urged the Fortune 500 CEOs to create more jobs, do more philanthropy, and work with constituted authorities to combat tax avoidance and tax evasion.

The 2016 forum, as convened by Fortune and Time magazine, had select global Fortune 500 CEOs, members of the Time 100 and nonprofit, academic, religious and labour leaders in attendance.