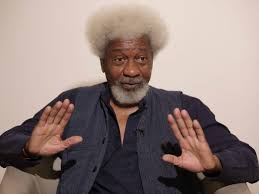 TVC N. Wole Soyinka, a Nigerian professor and Nobel Laureate, says he is embarrassed to be in the same country as “imbeciles and morons”.

Soyinka said this on Monday while analysing the reaction of Nigerians to his threat to tear his green card, after Donald Trump emerged the US president-elect.

While speaking at a media parley at Freedom Park, Soyinka said he was planning his own Wolexit, an adaptation of Brexit. “Why do Nigerians wail louder than the bereaved?” he asked.

“I am embarrassed to occupy the same nation space as some imbeciles and morons.  I am planning my Wolexit, which could be internal or external.

“On the day of Donald Trump’s inauguration, I will have a private funeral keep to mourn the death of Nigeria’s common sense. If the board agrees (because I do not like to be authoritarian) I will move the residency of my foundation out of the country. “