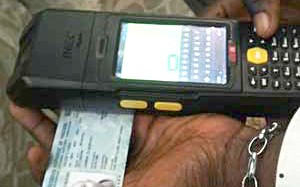 back on the use of the card readers in the forthcoming governorship election in Ondo state.

Shoyebi made the disclosure at the official presentation of soft copies of voter register to the twenty-eight political parties that will partake in the election in Akure, the Ondo state capital

Earlier in his speech, the state resident electoral Commissioner, Segun Agbaje said that the commission has no anointed candidate as alleged by businessman, Jimoh Ibrahim.