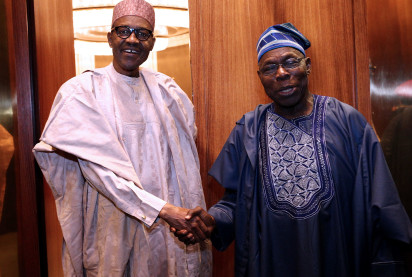 TVC N. Former President Olusegun Obasanjo has said that he always get angry whenever people blamed Buhari for not making comments concerning the destruction done by herdsmen, and other national issue.

Obasanjo who made this known in Abuja on Tuesday at an agriculture seminar in Abuja organised by Lift Above Poverty Organisation (LAPO), a Non-Governmental Organisation (NGO) with “Food Security and Sustainable Agriculture in Nigeria: Challenges and Opportunities’’ as theme said that herdsmen have the onus to look and take care their animals but it is ‘unacceptable’ for them destroy the crops of farmers.

Speaking he said that it not President Muhammadu Buhari’s job to find solutions to incessant conflicts between herdsmen and farmers and that ranching in Nigeria failed because the states and the local governments failed to do what they ought to have done.

Obasanjo said, “And some of the words that have been coming out from our leaders, particularly from state governors, are not helpful; they are not helpful. This issue is not a federal issue and another thing I don’t like about it is that when you talk of Fulani herdsmen, people talk of the President. “Now because the President of Nigeria is a Fulani man, then you would expect him to jump up and say this one is condemned and all that, no. That is not his job.

And when people make comments like this, it annoys me. They say the President hasn’t said anything about this, that he used to be the patron of something…, but I believe that the ranching thing failed because the states and the local governments failed to do what they ought to have done.” He, who questioned what had happened to the grazing reserves and routes? explicated that during the colonial era, certain areas were reserved as grazing zones in most parts of the North.

“I need to state that it is the responsibility of local conflict, you try to make it a national issue. But it is not really a national issue. “For me, the herdsmen are entitled to be able to look after their animals but they are not entitled to destroy the crops of the rural farmers, it is unacceptable.

“In 2016, the percentage of food insecure households increased from 33 per cent in February/March to 38 per cent in June/July, that is an increase of five per cent, which was as at June/July. We don’t know what it is now,”.

While calling on Nigeria to shun importation of some good and service mostly those food items that the country could produced he lamented that for Nigerians to spend huge funds importing toothpicks was ”unpardonable” saying that the government had spends more than it earns and for that reason the Naira is battling against the Dollar.

He said that researches had revealed that about 65 per cent of the country’s population were faced “food insecurity’’. He called on Nigerians to make the agriculture more attractive, saying that the country had a comparative advantage in the sector and should, therefore, not suffer food shortage.

‘We must all play our cards either in farming, processing, manufacturing, packaging, and we must put in our best to revamp the sector and address food insecurity in our country. ‘We must return to agriculture as a means to increase our food production in Nigeria.