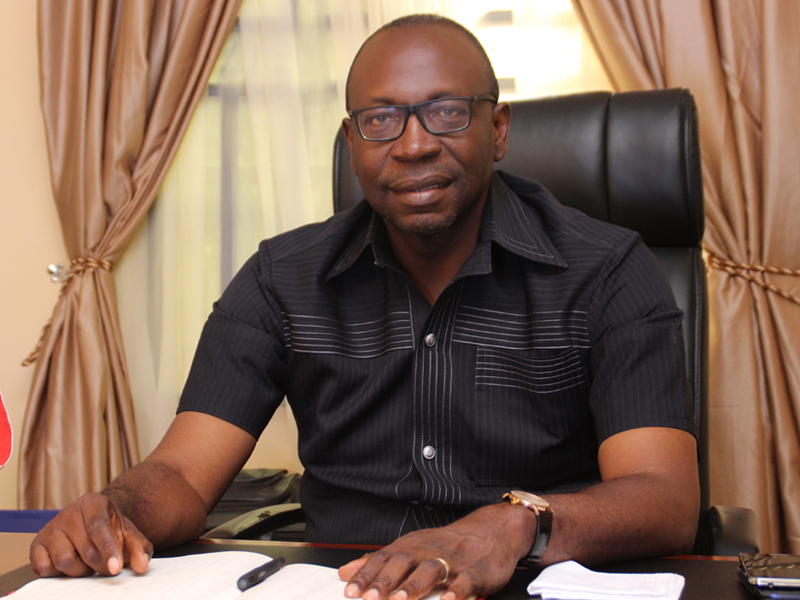 The People’s Democratic Party (PDP) has reportedly rejected the results of the Edo state gubernatorial election announced by the Independent National Electoral Commission.

According to a report by The Nation, the PDP said the results being announced BY INEC, which indicates the All Progressives Congress (APC) candidate, Godwin Obaseki was in a comfortable lead, were predetermined fabrication.

The party made the allegation on Thursday morning during a press conference held at its governorship candidate, Pastor Osagie Ize-Iyamu’s Ugbo Road residence in Benin City, The Nation reported.

At the briefing were the state chairman, Dan Orbih, Senator Matthew Urhoghide, Ize-Iyamu and Henry Duke Tenebe. Orbih said the official results from INEC were at variance with the result collected by their agents at the polling units, insisting that the PDP was the winner of the election.

He claimed that from the results available to them, the PDP won the election with at least 30,000 margins.

“It was too early to pass comment yesterday (Wednesday) without reports from agents. We have since received reports from party agents across 192 wards and all polling units in Edo State. The results being announced by INEC are not true reflection of the election.

“INEC started the process of announcing results in the election at their headquarters in Benin. They suspended the announcement at some point and promised to continue this morning.

“We took time to look at results from our agents and independent observers. From the results, PDP clearly won the APC in all the local government areas of the state with a minimum of 30,000 votes. But, we have compared them with INEC’s figures and observed there is a wide difference between the figures from party agents and independent observers with INEC’s

“The result by INEC has confirmed our statement less 48 hours to the election that the Edo State Governor was telling his party members and leaders that they have written the results of the election. Everything the PDP said is playing out.

“INEC disregarded results from various polling units. Decided to announce the one they wrote before election was held. While we continue to study this results still coming in from riverine areas, we are going to reject the result currently announced by INEC officials.

“Even areas we won, they have removed most of the votes with claims that card readers did not function in those areas. I wonder what the incident forms are meant for. They were supposed to address such problems. But in this instance, it is convenient for INEC to cancel all the results in areas we won.

“INEC should take full responsibility for malfunctioning card readers. What they are doing at the INEC is in line with what we said before election. All INEC officials are working in collaboration with Edo State Government who has taken pains to go into INEC office for no cause.”

Similarly, Ize-Iyamu condemned the results being released by INEC, accusing the commission and security agencies of connivance with APC, describing the outcome as a rape of democracy. The PDP candidate raised serious allegations against the ruling party, claiming that Governor Adams Oshiomhole’s government spent not less than N3billion to buy votes at polling units.

He said: “Contrary to claim that PDP brought in 8,000 militants, the election showed that PDP are law abiding and did not involve in illegality. The delays in announcing official result by INEC was in order to announce predetermined fabricated results.

“The Figures being announced by INEC do not represent the massive turnout. We have told our agents to bring all the results issued at the polling units. We do not want to rely on the messages they sent. In the next three or four days, will have complete record. From findings, it is clear a lot of manipulation has taken place.

“At George Idah Primary School, thugs came in, shot into the air and carted away election materials. Till now he has not been apprehended nor declared wanted. At Ward 10 Ikpoba Okah, APC thugs carted away materials. At Ohrionwon LGA, a PDP agent was arrested on the instruction of INEC because she complained about illegality.

There were over 300 non-Nigerians, whose names were put in the register at Ohrionwon to vote. We wonder why non-Nigerians would be allowed to vote in Edo election. At Etsako East, security agencies were shooting and driving people to perfect rigging plan.

“The results being announced by INEC were obtained by fraud and use of arms, ammunitions. There was no election at Etsako Central. Materials were seized. We talked about it, condemned it but yet, the results were accepted.

“The arrest of the journalists I invited from Abuja to cover the election was clearly an orchestrated plan to ensure PDP does not only lose the election but wouldn’t have the evidence of malpractices.

“INEC used the same result sheet whose serial numbers were disclosed on September 8 before the postponement of the election. These same result sheets were deployed to bring in fake results. Ballot papers and sensitive materials have been thump printed and shifted into the government house since two days.

“INEC has failed, connived and in conjunction with security agencies, betrayed the confidence of Nigerians. What transpired in Edo is rape of democracy. Everyone is aware that Edo government spent not less than N3b to purchase votes at polling units. PDP does not have that kind of resources at its disposal.

“A night before the election, APC members were caught with 3,000 PVCs and N15m but nothing happened to them. Within INEC, we have got calls from people who said we should protest the manipulation. Dissatisfied with outcome.”